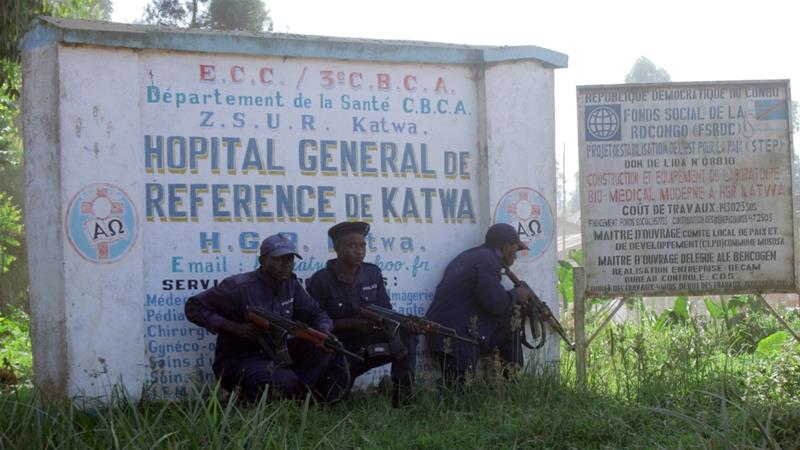 ISIL has claimed responsibility for a deadly attack in an Ebola-stricken eastern region of the Democratic Republic of the Congo (DRC).

In a statement issued on Tuesday by the armed group via Telegram, an encrypted messaging application, the Islamic State of Iraq and the Levant (ISIL or ISIS) group said it had targeted military forces in the city of Beni a day earlier, killing or wounding 25 people.

The group’s account of the violence appeared to differ from local reports. Modeste Bakwanamaha, deputy mayor of Beni, told Reuters news agency that 13 civilians were killed in an attack late on Monday.

Bakwanamaha said fighters from the rebel Allied Democratic Forces (ADF) – a group thought to be linked to ISIL – were responsible for the assault.

“The victims were killed by bullets and others by bladed weapons,” Bakwanamaha said.

He added that the violence was likely a response to a crackdown by the DRC’s army last week that killed 26 ADF members after they had earlier attacked an army position in Ngite, a village near Beni.

The ADF has never claimed allegiance to ISIL, but the latter recently alleged that its “Central Africa Province” affiliate had inflicted “dozens of casualties” on Congolese forces, according to the SITE Intelligence Group, which monitors the armed group’s online activity. There was no independent confirmation of the claims.

The ADF, originally a Ugandan group, has been operating along the DRC’s border with Uganda for more than two decades. It is one of scores of rival armed factions active in the region, including in the area around Beni, which is at the epicentre of an ongoing Ebola outbreak.

The widespread insecurity has hampered efforts to battle the epidemic, now the second-worst on record, with more than 100 attacks on treatment centres and health workers recorded since the beginning of the year, according to the World Health Organization (WHO).

Amid the unrest, the number of recorded cases surged past 2,000 this week as the rate of infection continued to accelerate.

The outbreak, which emerged in the DRC’s eastern North Kivu province in August and later spread to the neighbouring Ituri province, has killed 1,354 people so far, according to the latest figures from the DRC’s health ministry.

Health workers have inoculated more than 100,000 people to date as part of a government-backed vaccination programme aimed at containing the spread of the virus.

The vaccine is experimental but is estimated to be 97.5 percent effective.

Experts and aid agencies have warned the situation for responders on the ground has become “poisoned”, however, with health workers faced with widespread community distrust over the epidemic.

According to a recent study by the Lancet Infectious Diseases journal, large segments of the local population believe the virus is a fabrication invented for the financial gain of business-owning local elites or to further destabilise the area.

Tedros Adhanom Ghebreyesus, WHO director-general, last month described the situation as “one of the most complex health emergencies any of us have ever faced”.

“Unless we unite to end this outbreak, we run the very real risk that it will become more widespread, more expensive and more aggressive,” Ghebreyesus said.