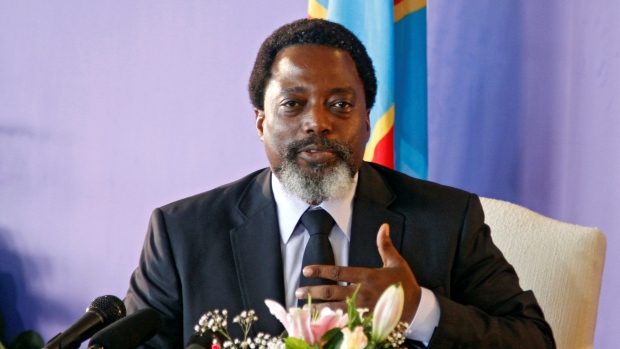 Congo’s president held a rare press conference Friday in response to international condemnation of the violent treatment of Catholic church members and activists protesting his prolonged stay in power.

President Joseph Kabila called the Central African country’s electoral process “firmly engaged” despite a vote that has been delayed for more than a year.

“Electoral law, registrations are almost complete, all files will soon be consolidated,” he said from the capital, Kinshasa. “Why then seek to derail the train leading to the elections? This is unacceptable.”

Congolese security forces killed at least six people and injured 68 others on Sunday as thousands of demonstrators held nationwide protests calling for Kabila to step down. His mandate ended in 2016, but a court determined he should remain in power until a new election is held.

Kabila, in his first news conference in six years, rejected charges that his forces had violently broken up pro-democracy protests.

“I am not [and] … will never be against peaceful protests by political parties,” Kabila, wearing a dark suit and tie and sporting what has become his trademark goatee, told journalists in the presidential palace. “But [not] if a political demonstration is intended to burn, kill police … incinerate things.”

Many critics accuse the president of delaying the vote to stay in office, especially after a deal brokered by the Catholic church to hold elections by the end of 2017 fell apart when Congo’s government said preparations would not be ready in time.

He has promised elections will be held near the end of this year.

The Fight for Change activist group LUCHA said on Twitter in response to Kabila’s remarks: “No excuse can justify the non-organization of elections in time.”

The United Nations says security forces used excessive force on Sunday, with its human rights monitors targeted. In a separate report, the UN this week also blamed Congolese “state agents” for 1,176 extrajudicial killings last year. Observers have warned that the political uncertainty is fuelling violence and could destabilize the region at large.

Kabila criticized the UN’s response to deadly violence in the Kasai region and the mineral-rich east, where a rebel group killed 15 UN peacekeepers in an hours-long attack on a UN base late last year. It was the deadliest attack on a UN peacekeeping mission in almost a quarter century.

“Despite our many calls to [the UN mission] against these terrorists, there was late reaction,” said the president, who has long been critical of the UN’s role in Congo.

The UN’s largest peacekeeping mission is in Congo, and it is unique in having a force intervention brigade with a special mandate to take offensive military action against rebel groups.

“Do we have security problems? Certainly. We are evolving in a concerted way to address it at the regional level,” he said.

Kabila also declared that Congo is a strong democracy, even as human rights groups accuse it of cracking down on opposition.

“Free press, freedom of opinion is respected,” he said. Congo “is due its dignity and must be respected. You cannot buy independence. My country is not for sale.”