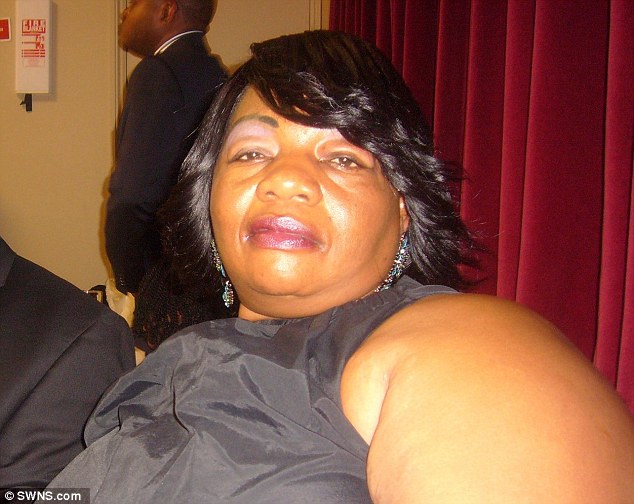 Mother-of-nine and her nephew, 21, were ‘shot dead in a case of mistaken identity when a gang of five men forced their way into her north London flat and opened fire’

Five men burst into a north London flat and shot dead a man and his aunt in a case of mistaken identity, relatives have said.

It is understood the flat was full of family members, including Anny’s husband Jean-Pierre, when the 21-year-old was reportedly shot in the head.

Relatives said that psychology student Bervil was shot in a case of mistaken identity by a gang who intended to kill someone else.

Bervil –  called Beverly by some members of his family – was said to have been asleep when he was shot and killed.

Speaking outside the flat on a small council estate, his sister Francine said: ‘He wasn’t the target. Someone living in that flat knew something like this was going to happen and left.

‘My brother was there, visiting his family, and he was in the wrong place at the wrong time. He was asleep – that’s what we’ve been told – so he was shot in his sleep.

‘Bervil was studying psychology at West London university. He was never in trouble – never been arrested.

‘He never even got in trouble at school. He was quiet. But he was a good brother. He was my best friend.’

She said: ‘Bervil was my son and he was an angel. He had never been in trouble, no fights nothing. He was just a perfect boy. I don’t understand what is going on.

‘He was an artist, he loved his photography and studied media at school. He was my friend, my best friend, my everything.’

Another family member, who asked not to be named, said: ‘It’s a case of wrong place, wrong time.

‘There were lots of people in the flat at the time. A gang of five forces their way in, came through the front door and shot Beverly.

‘Beverly doesn’t live here. He was spending the night with his auntie.

‘Five people burst in the doors. He got shot in the head and they shot Anny. The house was full of people.’

A cousin of Ms Ekofo said her husband has been taken to a psychiatric unit due to the shock of witnessing the shooting.

Police were called to the block of flats in Elmshurst Crescent, East Finchley at 6.25am today.

Grieving family members, who gathered outside the flat, gave details of the victims.

Both of the victims are believed to be of Congolese descent.

Fifi Selo, Anny’s cousin, told how she received a phone call from the police at 8am and rushed to the scene from her home in Enfield.

The 38-year-old said: ‘She was a big, beautiful woman. A mum to everybody. You can’t even imagine what kind of person she was – she was amazing.

‘She brought everybody together. She was everybody’s mum. We don’t know what happened. We just got a call saying they had been shot.

‘She came over from Congo in 1991. She has nine kids. I didn’t expect this to happen. It’s crazy.

‘We have no idea. The police have said nothing. We think someone from outside and did this but we really don’t know.

‘Her husband, Jean-Pierre, we think, was in the house at the time but we haven’t seen him.’

A Scotland Yard spokesman said: ‘Police were called by London Ambulance Service at approximately 06:25hrs on Thursday, 15 September to reports of two people injured at an address in Elmshurst Crescent, N2.

‘Officers attended and found two people – a man and a woman – suffering gunshot injuries. Both were pronounced dead at the scene.’

The spokesman said the Met Police’s Homicide and Major Crime Command have been informed. No arrests have been made.