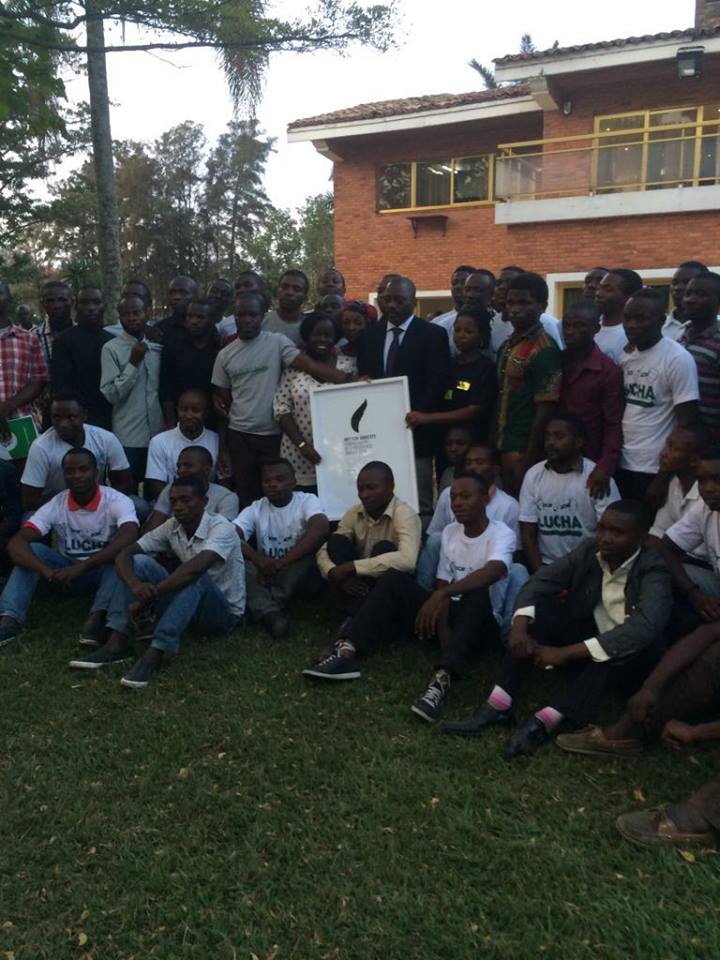 Following their meeting with the president  Joseph Kabilla La Lucha released the following document on their social network:

Minutes of our meeting with the President of the Republic Joseph Kabila.
1- A large delegation of our citizens’ movement, Lucha (Struggle for Change) was received in audience by the President of the Republic, Joseph Kabila, the afternoon of this Thursday, August 18, 2016, at the Governor’s cabinet North Kivu in Goma. The meeting, which lasted nearly three hours, was held at the request of the Presidency of the Republic. It was held with cameras in the presence of the President of the Republic, assisted only by two members of his protocol service. For its part, the delegation of Lucha was composed of fifty militants, two of whom spoke on behalf of the group and a third assured moderation.
2 – On the recommendation of La Lucha, exchanges revolved around three topics namely: the security situation in the eastern DRC and especially in the Beni region; the political and electoral process; and finally the situation of human rights and fundamental freedoms. But before addressing these issues, we had to explain to the President what was La Lucha, the purpose, values and principles of our peaceful struggle, especially since that was the first meeting with him since the conception of Lucha in March 2012. 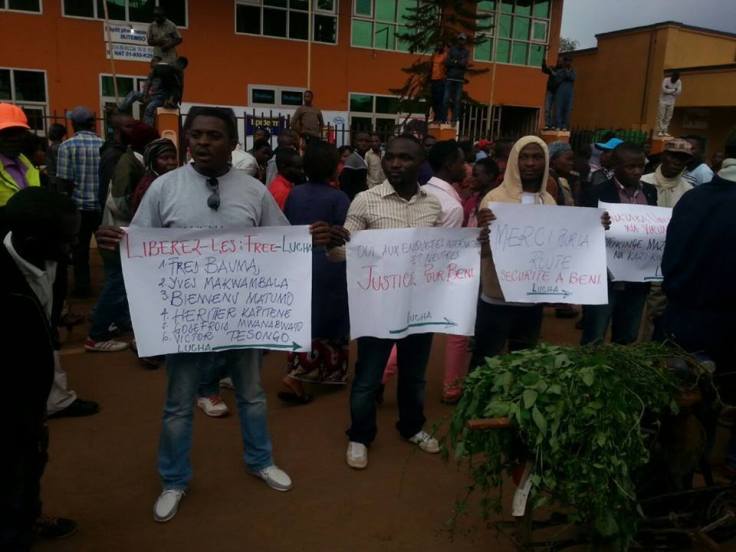 3 – We explained to the president that Lucha (or Struggle for Change) is a non-partisan citizens’ movement and non-violent, which aims to engage the Congolese to assume its destiny as citizens and as a nation by making each of his duty properly, demanding uncompromising respect for their rights and defending their freedom and dignity whatever the cost. We explained that it is in this light that we must understand our struggle for democracy today; for security, justice, participatory governance, basic social services, etc. We criticized the fact that instead of encouraging civic engagement and non-violent youth as activists of Lucha, the government preferred to treat us like criminals by systematically preventing us from expressing ourselves, by exploiting the security services and justice to punish us, see us as terrorists and subversives. We reminded him that this attitude contrasted with the democratic dream of Congolese youth and the hope that had aroused his election in 2006, when he was just 34 years old.

4 – Reacting to these remarks, President Joseph Kabila said: “I’ve never considered you as terrorists. If that were the case, I will not be sitting with you now. You represent a Congolese youth who have legitimate claims and an important role to play in the development of the nation. “He said he was surprised to learn that some authorities do not even take the time to listen to us, and promised to educate especially the governor of North Kivu Julien Paluku take the time to receive and listen to us all whenever we ask.
II. On the security situation in eastern DRC and Beni in particular. 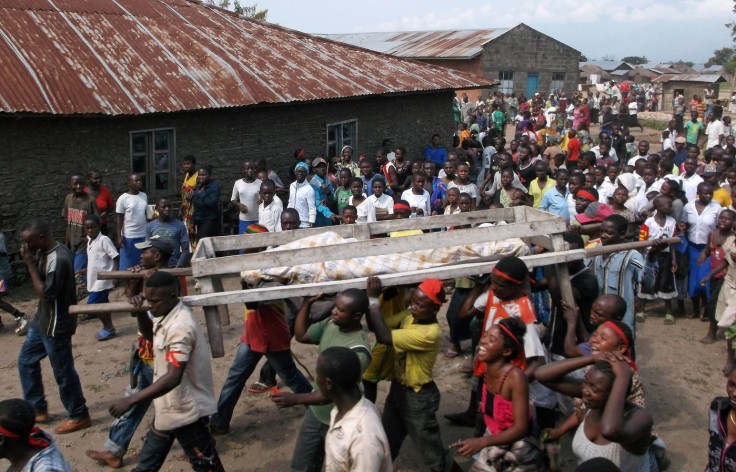 5 – We blasted the repeated massacres of our people in the Beni region, with the same procedure for nearly two years, the total impotence of the state, even complicity of the authorities in relation to their contempt victims, repression against those who demand truth and justice, and their refusal to seriously investigate the recurrent allegations of collusion between certain officers with the killers. At the same time, violence is reported all over the East of our country and recently in Kasai, often with the involvement of corrupt politicians who exploit ethnic identities between citizens with each other. The state manages the violence with a guilty indulgence. In the case of North Kivu (Lubero, Rutshuru, Walikale, Masisi), the army often opts for a camp, and some officers allow themselves to supporting armed groups with impunity from their hierarchy.

6 – We reminded the President that as Supreme Commandant of the Armed Forces of the DRC is its primary responsibility to ensure the safety of Congolese to public peace, territorial integrity, etc. Finally, we made several recommendations, including:
1. The reform of the chain of command of the security forces and the availability of all Justice Officers suspected of colluding with the negative forces, including General Mundos.
2. The total revision of current operations in the East (Sukola1 and 2) against the ADF and FDLR with the Replaces units, changing strategies, strengthening of military intelligence…
3. The official Congolese government request to the UN to establish a mission of independent international investigation into the killings of Beni, including perpetrators, sponsors, supports, motivations, etc., which will perhaps also support the theory of a ADF NALU mutation into a jihadist group because the government claims so far looks like a pretext not to acknowledge its responsibilities.
4. Strengthening security forces (army and police) deployed in the East and in North Kivu in particular, in terms of staff, resources for mobility and communication, housing (barracks, bases), rationing, increased and regular pay their balances, as well as their rational distribution in the territory.

7 – In this regard, the president justified the helplessness of his government face including the massacres of Beni and the FDLR, arguing that he was not responsible for the presence on Congolese soil of these rebels. He returned on the “asymmetric and complex” nature of the war waged by the ADF and FDLR, their perfect knowledge of the terrain “sometimes better than the FARDC,” and said his government would “make every effort” to restore Security.

III. On the political and electoral process. 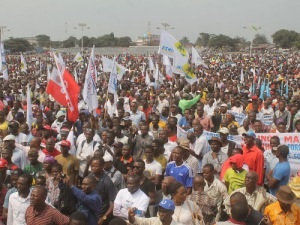 8 – We hammered for Lucha as the vast majority of Congolese, the democratization of our country is irreversible. We reminded him that this year 2016 changeover at the head of the state has to take place, and that all he can influence this is by how things will unfold: either he agrees to hold elections which constitutionally must be called in exactly one month (19 September 2016) or the People has no choice but to take charge himself, with all the risks that the latter scheme includes. We reminded him that delays in the electoral process that brandished to justify the non-holding of elections on time is not an accident but the result of a rotting strategy intentionally created and maintained by its movement hoping it would allow him to stay in power as long as possible. We also mentioned that several proposals had already been made on the possibility of holding the elections on time with the time remaining. We insisted on the fact that for us the struggle for alternation is not a struggle against him or to support any political camp, but a legitimate fight FOR the consolidation of our democracy and respect for our constitution. We urged to go positively in history for himself, for his own posterity, and in the interest of the nation, operating a peaceful and civilized transfer of power at the end of his last term the December 19, 2016.

9 – In this regard, the president argued that he does not want early election that will lead the protest and violence as in 2006 and 2011. He spoke of the protest calendars issued by and passed by the CENI and the “need for political consensus” before the publication of a new calendar, hence the “political dialogue” he has called for a year. He also said that “democracy in its current form costs more to our country than development,” and it was important to “minimize the financial cost of democracy”, without explaining how, adding that his government had already exercised the option to finance itself the elections because it is a matter of national sovereignty, and that “we cannot hold elections to please the international community.”He said we cannot do elections without an electoral roll, or like the one in 2011 that is neither credible nor inclusive, mentioning the issue of” new majors.” “He stressed” the importance of starting the electoral cycle by the local elections, because development comes from the base. ”

IV. On the situation of human rights and fundamental freedoms.

10 – We discussed the narrowing of political space in the country, characterized by the almost systematic repression of demonstrations outside those of the “presidential majority”, the muzzling of all critical voices including restrictions of Internet access and the closure of some media, the transformation of public media in a partisan propaganda tool for the government, etc. We blasted the use of justice and the security forces, especially the National Intelligence Agency, for political purposes. We asked for the release of our comrades imprisoned in Kinshasa, emphasizing the particular case of Fred Bauma and Yves Makwambala who are in their 19th month of “preventive detention”, without any glimmer of a fair trial, and Bienvenu Matumo, Heritage Kapitene, Godefroid Mwanabwato and Victor Tesongo. We promised to send him a detailed record of their situation. We asked for the release of all prisoners of conscience and political prisoners to redress injustices and defuse the political climate.

11- The President of the Republic, who carefully took notes, we said, “I give you my officer’s word,” assuring us that he would follow the requests “within 48 hours”, that is i.e. by Saturday, August 20, 2016. He informed us that he had instructed the Prosecutor General of the Republic and the ANR to avoid in the future of “unwarranted arrests” of activists, and to undertake the liberalization of those who are currently detained.
V. Presentation of the prize “Ambassador of Conscience”

12 – At the end of the meeting, we took the opportunity to present to the President of the Republic the prestigious “Ambassadors of Conscience” award in May by Amnesty International to LUCHA, together with our comrades in Y A Marre (Senegal) and Balai Citoyen (Burkina Faso) and with the Beninese singer Angelique Kidjo. We expressed our frustration to see our fight and struggle recognized internationally, while our own authorities repress and chase us. The President congratulated us for this award.

13 – The meeting ended in a friendly atmosphere by taking a souvenir photo of the president surrounded by 47 activists Lucha. We thanked him for his kind invitation, which is not only a gesture of openness, but above all a recognition and esteem for our citizens’ fight. We have expressed the wish to see him again soon as the first ex-President of the Democratic Republic of Congo in life, and wished him well in his future career Senator.

Comments on our part:
14 – The meeting, first of its kind with the President of the Republic, has been variously discussed in public opinion. We want to remind everyone that the LUCHA is faithful to his civic nature republican, non-partisan and non-violent. As such we are open to talk with everyone and everywhere we can make our voices heard, to defend our idea of democracy and change. We therefore welcome the opportunity to speak directly to the president to express freely and in complete independence of mind our frustrations, to assert our claims, and suggest solutions in a constructive way.

15 – We have not been convinced or satisfied with many of the arguments of the President, specifically on security issues and the electoral process, and we do not intend to let go of the pressure in this regard. We have also agreed to forward the written summary of our discussions at the Presidency of the Republic for consideration, which will be done as quickly as possible.

16 – We look forward to the President of the Republic honours its “official speech” including ordering the release of our six comrades still imprisoned in Kinshasa, as well as all other prisoners of conscience, and releasing political space for the Congolese to express themselves peacefully and express their opinions, whatever they are. As for the other proposals (on safety and on the democratic process), we hope that we listened and he wisely follow our recommendations.

N.B. We have not touched a single penny nor taken any gift, no food, no “transport envelope” or anything like that. It’s against our principles, and politicians know it full well!
The struggle continues!
Done in Goma, August 19, 2016.
For Lucha,
Communication and Information Unit.
For contact:
Fight for Change
Non-partisan non-violent Citizen movement &
Young people of the Democratic Republic of Congo
Tel : +243 99 4645 977
Email: lucha.rdc@gmail.com / info@luchacongo.org
Facebook Page: http://www.facebook.com/lucha.rdcongo
Twitter: @luchaRDC / Skype: lucha.rdc
http://www.luchacongo.org