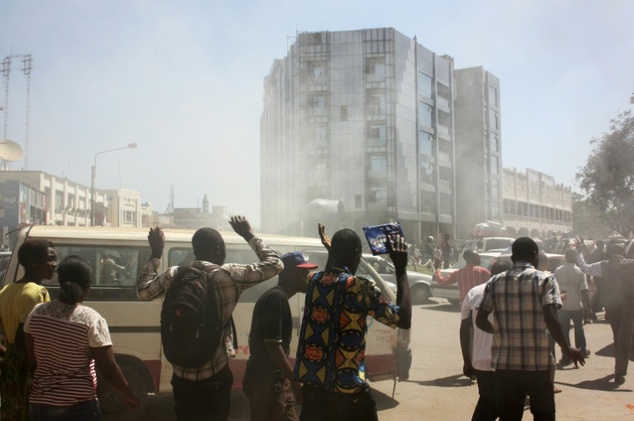 Congolese opposition figure Moise Katumbi was treated in hospital on Friday after police fired tear gas at him and his supporters outside the prosecutor’s office in the southern mining hub of Lubumbashi, his lawyer said.

The former governor of Democratic Republic of Congo’s main copper-mining region had been summoned for questioning over allegations he had hired mercenaries, including former U.S. soldiers, as part of a plot against the republic.

Katumbi denies the accusations, which he says are aimed at derailing his campaign to succeed President Joseph Kabila, who has ruled since 2001 but is barred from standing for a third term in an election set for November.

Shortly after Katumbi’s arrival, police fired tear gas at thousands of his backers, who had gathered outside the prosecutor’s office to show their support, and the two sides pelted each other with stones.

“He is sick. He was attacked. So it’s normal that the doctor would want to keep him under observation,” said Georges Kapiamba, who told Reuters Katumbi had inhaled tear gas and was manhandled by police upon his arrival.

Friday’s violence was the third time in five days that police have dispersed Katumbi’s supporters amid questioning by the prosecutor that began on Monday.

“It’s sad that there is not a state of law – police officers who throw stones and wound my older brother,” Katumbi said before finally entering the building.

Political tensions are high in Congo, where dozens were killed in January 2015 in protests over a proposed revision of the electoral law that critics said was a ploy to keep Kabila in power beyond the end of his mandate.

Kabila’s critics accuse him of trying to delay the November election to cling to power. The government has said that it is unlikely to be able to organise the poll in time due to budgetary and logistical constraints.

The country’s highest court ruled on Wednesday that Kabila would stay in power beyond the end of his mandate this year if the election does not take place.

In a statement on Friday, leading opposition parties accused the court of supporting a “constitutional coup d’etat” and called for marches across the country on May 26 to demand that Kabila step down this year.

(Reporting by Kenny Katombe; Additional reporting and writing by Aaron Ross in Kinshasa; Editing by Joe Bavier and Alison Williams)